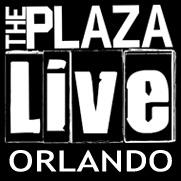 Orlando’s only independent music venue. The Plaza LIVE was voted in Pollstar’s top 100 venues in the world in 2010, 2011 and in the Top 50 in 2012! Come and enjoy a show in the best sounding room in Central Florida.

The Plaza LIVE Orlando is a 501c3 non-profit corporation that is wholly owned by the Orlando Philharmonic Orchestra since August, 2013.