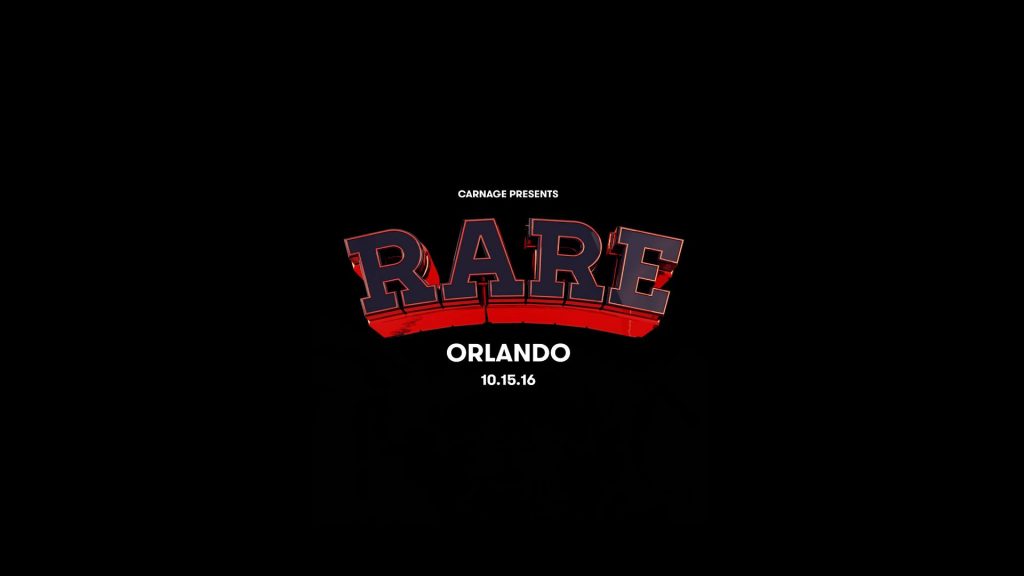 AEG, DDP & HTG Events will be hosting RARE in Orlando on Oct 15th 2016 at Central Florida Fairgrounds! Follow the link for event and ticketing information.

Sweden’s Carnage were spawned by the same small, close-knit scene which gave birth to Entombed in the late ’80s. Fueled by the booming death metal underground tape trading network, the group infused the lessons of American acts, like Death and Morbid Angel, with the sounds of British grind core exponents, like Napalm Death and Carcass, to create a somewhat unique niche all their own. Its membership in constant flux, the band’s early lineup included vocalist/bassist Johan Liiva Axelsson, guitarist Michael Amott, guitarist/bassist Johnny Dordevic, and drummer Jeppe Larsson. After two demos which were widely distributed in cassette form, the group recorded their only bona fide record, 1990’s Dark Recollectionswith new members, vocalist Matt Karki, guitarist David Blomqvist, and drummer Fred Estby. Such constant musician turnover proved too much to deal with, however, and the band disintegrated even before the album’s release. Amott moved on to greater fame with a long stint in Carcass, and laterArch Enemy and Spiritual Beggars. Dordevic briefly joined Entombed as lead vocalist, and most of the remaining band members formed Dismember.

Julian Scanlan, born 1997, is a Monstercat artist hailing from Mount Laurel, NJ. He worked with the psychedelic progressive pop band Deuteronomy from 2009 – 2012, playing bass on their debut album, The Propaganda of Deuteronomy,released in 2012.

Following his departure from Deuteronomy, Julian, under the alias of DJ Swoon, began to make some noise online with original works and remixes. A remix of OneRepublic’s If I Lose Myself and Rasta Pasta, a song collaborating with Sean Sauce, each got hundreds of thousands of hits on YouTube.

He also was one half of the duo Monsters With Tiny Mustaches.

After deciding to start anew under a fresh moniker after the termination of the DJ Swoon soundcloud account, Julian quickly rose to stardom with his remix of Skrillex’s Killa. Putting a fresh twist on a classic feel of dubstep, Slushii is currently riding high, appearing on stage with Skrillex and Marshmello.

His debut album, Brain Freeze, was released in 2016 and soared up the iTunes EDM charts, peaking at #4.

Enigmatic masked DJ/producer Marshmello makes groove-oriented, synth- and bass-heavy electronic dance music. In the spirit of other masked DJs like Deadmau5 and Daft Punk, Marshmello (whose real identity remains a mystery) appears wearing a full-head-covering marshmallow mask. Despite the anonymity, Marshmello’s career blew up in 2015 when he began releasing tracks online, including remixes of Zedd’s “Beautiful Now,” Jack Ü’s “Where Are U Now,” and others. From there came shows at New York’s Pier 94, Pomona, California’s HARD Day of the Dead festival, and Miami Music Week. In 2016, Marshmello released a compilation of his previously released tracks, Joytime, which reached number one on a digital top electronic albums chart. Included on the album was the single “Keep It Mello,” featuring rapper Omar LinX. ~ Matt Collar, Rovi

Coming on the scene with a throwback style that betrayed his years, Pittsburgh-based rapper Mac Miller had just turned 18 when he spent 2010 making his name through mixtapes and video-sharing websites. Born Malcolm McCormick, Miller first used the alias “Easy Mac,” a name referenced on his debut mixtape, 2007’s But My Mackin’ Ain’t Easy. His K.I.D.S. mixtape became his breakthrough when it was released in August of 2010, earning plenty of attention from hip-hop blogs and landing Miller a recording contract with Rostrum Records. Rostrum released his debut EP, On and on and Beyond, and his debut album, Blue Slide Park, in 2011. The album debuted at number one on the Billboard 200. The more experimental effort Watching Movies with the Sound Off followed in 2013, with left-field hip-hop names like Action Bronson, Earl Sweatshirt, and Flying Lotus lending a hand. A year later he signed with Warner Bros. and launched his own imprint, REMember Music, under the major label. GO:OD AM followed in 2015 with Lil B, Chief Keef, and Miguel on the album’s guest list. ~ David Jeffries, Rovi

Carnage
Diamond D. Blackmon
City of Managua, Nicaragua
www.papigordo.com
"Making music is about having an impact," exclaims DJ Carnage.It's easy to feel the impact on every track the Los Angeles-based artist produces or remixes. With a versatile mindset and deft approach, he siphons electro, hip hop, pop, and trap into an intoxicating brew unlike anything out there. It's dirty, defiant, and diverse.Carnage embraced music at a very young age. Before moving to the suburbs of Maryland, he grew up in Nicaragua and Guatemala. It gave him an international consciousness and perspective at a young age that would pervade his art. In order to get through long car rides with his mom, he'd make mix CDs of everything from Kanye West to Michael Jackson, and they'd listen to them together. It was with mom's encouragement that he began actually building his own tracks.He recalls, "It's funny because one day my mom was like, 'Why don't you make your own beats?' I'd never thought of it before, so she bought me Fruity Loops. From there, I just got hooked."He carved out a sizable local following in Maryland, slinging independent mixtapes and solidifying an online presence. Niles from The Cataracs actually stumbled upon his MySpace page and immediately became a fan. Their correspondence turned into a creative partnership and led to Carnage's signing with Indie Pop.One of his first projects under that banner was a tripped-out and captivating remix of Yuna's "Live Your Life". Soon, Tiesto began spinning the cut on his popular Club Life podcast, while Paul Oakenfold inserted it into regular rotation on his radio show, Planet Perfecto. Carnage began turning heads. His "Festival Trap" remix of Hardwell's "Spaceman" soon exceeded 100k plays on Soundcloud, and he teamed up with Theophilus London and ASAP Rocky for the 2012 single, "Big Spender", and he co-produced The Cataracs "All You", featuring Waka Flocka Flame and Kaskade.Everything simply laid the groundwork for the release of his proper debut, "Bang", on Fool's Gold though. It's an incendiary instrumental with a big hip hop bounce and a dubstep drop at just the right moment. "It's really massive," he enthuses. "It's a rap record with a huge drop. You never hear that kind of climax in hip hop or trap records. It's the perfect introduction to who I am because it touches on so many genres."The single's B-side is a grimy and guttural gem that sees him collaborate with 15-year-old Chicago underground rap sensation, Katie Got Bandz. It's bound to get the internet going crazy.There's nothing quite like seeing Carnage live though. Every show explodes based off his hyperkinetic energy and formidable presence. He's rocked stages at Nocturnal Wonderland, Electric Daisy Carnival, Coachella, and more as well as performing alongside Borgore, A-Trak, The Cataracs, and countless others."I'm a big black guy who loves to rage," he chuckles. "I'm not what you expect. I feed off the crowd and go for it."That's why Carnage's impact will be felt for a long time to come.