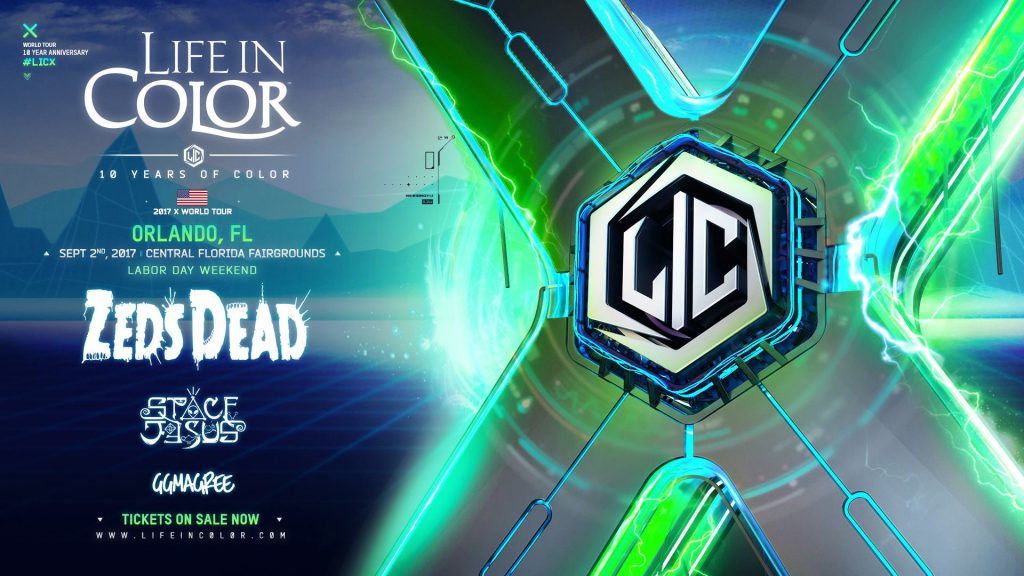 Life in Color, DDP & HTG Events will be hosting Life in Color in Orlando on Sep 2nd 2017 at Central Florida Fairgrounds! Follow the link for event and ticketing information.

The tape reads Biography. Pop it in. Rewind. Press play.
A whiskey-voiced narrator starts speaking as the hazy images come into focus.

“It’s 2010. Zeds Dead is about to play one of their first shows in the basement of a dive bar in Toronto. Behind the brick walls and the unfinished ceiling exposed wires hang freely. The air smells of booze, smoke, and sweat. A crowd is lined up outside, flasks hang from their back pockets and cigarettes from their lips. Abandoned drinks rest on the lip of the dj booth while joints get sparked in the corners.

The tiny room is packed. Nobody quite knows how to describe the music yet. When Hooks and DC start their set the earth trembles. The air becomes charged and almost sexual. Everyone goes crazy. You feel the music in your bones. Your marrow shakes. You don’t know what they will play next but you know it might just change your life. Everybody at those early shows could tell – these guys are gonna be big.”

“It’s 2013. Zeds Dead is killing it. They’ve got an enormous catalogue that includes remixes for some of the biggest artists out there, and releases with the most credible labels in the game. They’ve accumulated hundreds of millions of views online. They play tours of over 70 dates to hundreds of thousands of people. Fans love their shows, critics love their creativity, and heads love their production. They’re big. Really big.”

Rewind again. Further than before.

“The date’s not important. The place is Toronto, Canada. Teenagers Zack Rapp-Rovan and Dylan Mamid are introduced – they hit it off immediately over a shared love of classic hip hop, music production, and digging through crates. They join forces and call themselves Mass Productions aka MP Records. Dylan becomes DC and Zack becomes Hooks. They work out of DC’s often smoky garage. Critiquing, dissecting and swapping samples. They grow with every tune. They get on a level where their combined sound is unified and strong. MP releases an LP of hip hop instrumentals called Fresh Beets. It’s a pivotal moment for the duo.”

“It’s 2009 and hip hop is in a coma. Hooks and DC are about to have an epiphany that will change everything. They thirst for something new. They want to make people move to their sounds and not just bob their heads, but to grind, heave, shiver, stomp, and dance to their music. They want to capture the ecstasy and comradery of house, the heart pummelling thrill of Drum and Bass, the beauty of ambient music, and the heaviness of electro – all in one sound. They want to push boundaries. To challenge themselves and their listeners to”–

Space Jesus aka Jasha Tull is a Brooklyn, NY based electronic music producer. Born and raised in New Jersey, Jasha’s firm roots in hip-hop are apparent in most of his productions. With a focus on bass-line synthesis, commanding beats and futuristic feels, Jasha injects his signature sound on every sub-genre he graces.

Girl boss and all round BAE is how majority of the world refer to Australian DJ/producer and vocalist GG MAGREE.

Hailing from Sydney Australia, GG MAGREE has been named Australian artist to watch for 2016 by Spotify.

When GG gets behind the decks be prepared for a 10/10 booty popping performance, the chance of a surprise celebrity show crasher and one hell of a show.

GG is rapidly being recognized by the international music scene as the girl that plays hard trap like the boys, but still keeps a sexy attitude to her music with a larger than life personality.

Selling out shows and making big statements everywhere she performs GG has no intention of slowing down for the remainder of 2016.