HTG Events, Gilt, & DDP will be hosting Flux Pavilion in Orlando on Sep 10th 2016 at Gilt! Follow the link for event and ticketing information.

Flux Pavilion is a one man orchestra! With the ability to Sing and play a large variety of instruments it’s obvious that music comes naturally to him. Since first sitting down at a keyboard at the age of six his dream has been to make music that he loves and perform it to people who love it just as much.

Flux Pavilion AKA Joshua Steele has always been influenced by hard hitting dance music in everything that he does and it was only a matter of time before he found his own sound in the dance industry. in early 2008 Dubstep lit this internal fuse and he hasnt been the same man since.

Influenced by the likes of The Prodigy,Basement Jaxx and dubstep pioneer Rusko, Flux loved the high energy madness that dance music was capable of and set about making some of his own in the form of dubstep. Already adept with production skills he was soon off the starting block and his tunes were in swift circulation on the dubstep forum and were becoming a familiar name in the scene. What started of as a bit of experimentation soon became clear that Flux has definitely landed on his feet with the dubstep sound.
Before long labels were banging at his door itching to release his music sohe decided that the world was ready for a bit of Flux Pavilion! Signing tunes to Rottun, Shift, XS Records, Stupid Fly and Dubmented beats and working with artists such as Datsik and Trolley Snatcha, his tunes were dominating the charts and starting to receive alot more interest from the big boys.

In a little over 6 months, JOYRYDE has risen from complete unknown to one of the most buzzing acts on the planet. With support from the likes of DJ Snake, Major Lazer, Big Gigantic, Yellow Claw, Tchami, Jauz, Knife Party, NGHTMRE, GRIZ, Don Diablo, Ephwurd, Ghastly, Dyro. and more, the highway to success is paved with bass. JOYRYDE’s brand of #SwerveHouse is firmly expressed through his massive singles “FLO” and “SPEED TRAP.” Jauz not only champions his “Stick It In Reverse” mix of last summers hit “Feel The Volume,” he has been opening his sets with it for months.

His most recent hit “HARI KARI” made it all the way to BBC Radio 1 via NGHTMRE’s Diplo & Friends mix and was also heard in Yellow Claw’s heralded mixtape series. With every blog raving about the lad, Dancing Astronaut put it best; “At a time of radio-safe club maneuvers, his is a brand out for blood.” He ended 2015 with the launch of his self designed apparel line #RYDRWARE. With an arsenal of unreleased tracks, all the big names chatting about him, and some lofty touring goals, JOYRYDE is sure to hit the ground running in 2016 … and bring all his Rydrz with him. 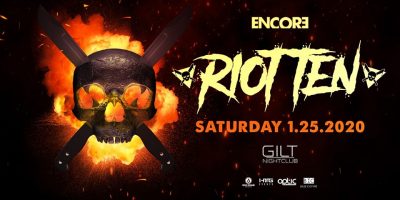 Gilt Nightclub Orlando, FL
10:00 pm - 3:00 am
END_OF_DOCUMENT_TOKEN_TO_BE_REPLACED
Flux Pavilion
Joshua Steele
Towcester, United Kingdom
www.fluxtesla.com
Known for his 2011 hit "Bass Cannon", English dubstep producer and DJ Joshua Steele took the name Flux Pavilionaround 2008 when he released the track "Cheap Crisps" as a digital download. Steele had grown up in Towcester where his neighbors were like-minded producers Doctor P andTrolley Snatcha. At the time, all three had been playing in guitar-based bands together, but after downloading some music creation software, they agreed the future was digital and were set on their dubstep paths. Fast forward to 2010 and Flux Pavilion had made a name for himself with plenty of club hits, remixes, and DJ gigs, but that year's "I Can't Stop" took his career to another level. Two "fans" Steele met on a tour of America asked to sample the cut for their upcoming hip-hop album, and a year later "I Can't Stop" became the basis of "Who Gon Stop Me" on Jay-Z and Kanye West's collaborative effort Watch the Throne. Flux Pavilion's hit track "Bass Cannon" arrived that same year, along with a collaborative cut with Doctor P, "Super Bad."