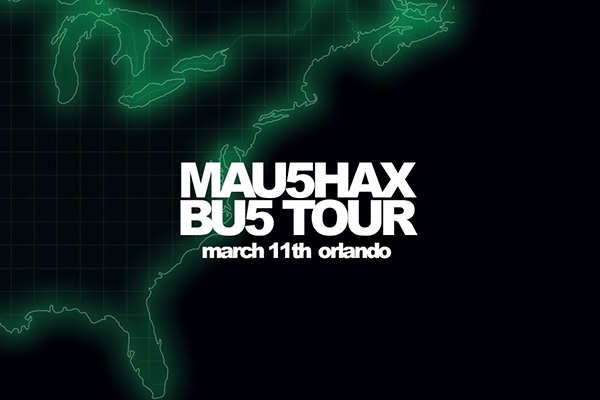 HTG Events, Gilt, & DDP  will be hosting Mau5hax  in Orlando on March 11rd, 2016 at Gilt! Follow the link for event and ticketing information.

The notoriously camera shy ATTLAS has come a long way from the days of writing Lord Of The Rings-­esque music for a BBQ sauce commercial (for free). He first came to prominence in November 2014 with the heavily sought after deadmau5 ‘Aural Psynapse’ remix. It caused a tidal wave of speculation that ATTLAS was in fact a side project of the mau5 himself.

That speculation ended when he was officially ‘outed’ by Pete Tong , announcing ATTLAS is Jeff Hartford, Canadian producer, dj and classically trained musician. An incredible depth of influences from travelling, alongside music, film and art worlds have had a decided effect on his musical outpourings, which were all jazz, classical and guitars until trips to Amsterdam, Berlin and attending the homecoming ‘Meowington Hax’ 2k11 tour. As Jeff says himself: ‘From there, it was a musical attempt to synthesize my influences and aspirations as best as I could.’ But not content to fit the mold or cracking a ‘sound’ to repeat ever after, as anyone who’s followed him can attest to.

In between the remixes he has continued to release club bombs like ‘Sabs’, ‘Boxed’ and most recently ‘Chemical Low Moan’. another 6 track EP, which will give us further insight into the eclectic depth ofATTLAS’ mind, revealing his passion for all things filmic with dark edges, be it ethereal vocals, heads down club tracks, or his 6am piano laden soothers. ‘Wastaga’ will be the first track to be taken from the EP – the kind of a sweaty, dark room destroyer that will lace his dj sets.

The first ATTLAS dj appearance at Verboten NYC for the Governor’s Ball after-­party, was a hot sold-­out affair, which included a back to back stint with none other than the mau5 himself. It became a ‘needed to be there’ kind of night.

You would think that there would not be much time for anything else in Hartford’s world but in fact he’s known for being a dab hand around the kitchen too, cooking being the other major passion in his life.

The word ‘prolific’ tends to get over used nowadays but with more show dates to be announced, several, high profile remixes and a further EP release before the end of 2015, it’s fair to say it’s been one hell of a year for Mr Hartford!

Matt Lange has become a name synonymous with attention to detail, precision, and musical craftsmanship, all without losing sight of emotional impact. Mattʼs musical pedigree veers strongly from the typical path of the modern electronic musician; from singing in a boys’ choir to later playing lead guitar in a metal band, his influences are as varied as they are numerous…

Steve Duda is known for his creative composition and technical efficiency. In the creation of BSOD, with dear friend and co-producer Deadmau5, their sound has received critical acclaim and has been featured on Pete Tong’s RadioOne show as well as many top international DJ set lists. With nearly three decades of production under his belt and working with renowned artists such as Nine Inch Nails, Rob Zombie, Sugar Ray, A Perfect Circle, Tommy Lee, as well as many others, he has been able to put together an act of his own. Duda performs in a live manner with such devices as the Lemur and Monome integrated with custom-built software to give a unique and inspiring show. On stage, Duda plays mostly his own music, including BSOD titles, which he sequences on the fly, while writing and manipulating drum parts in real-time. Duda’s 2010 performances will give way to a spectacular show, with custom visuals, that will reset the electronic musician’s principles!

All about the Mau5trap Tour Bus!