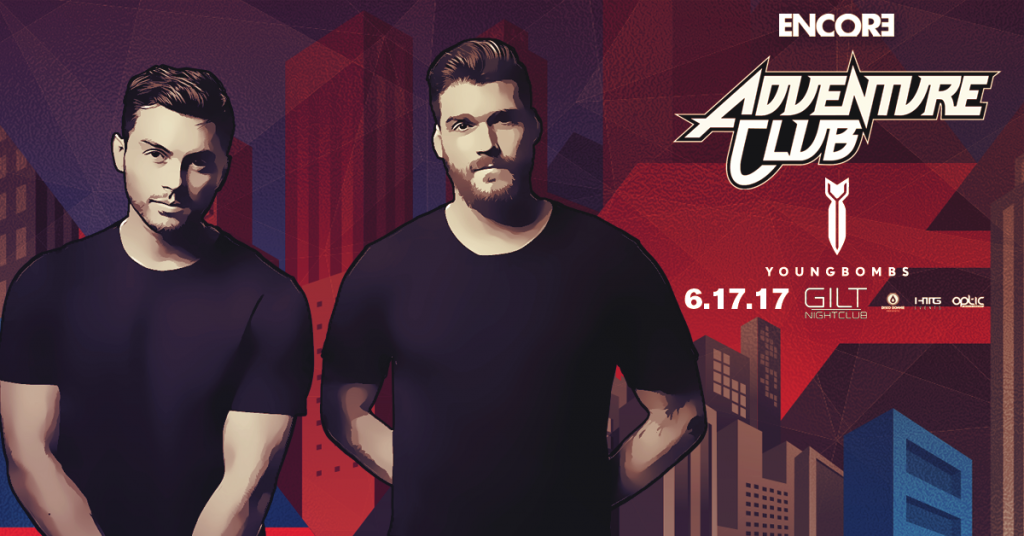 HTG Events, Gilt, & DDP will be hosting Adventure Club in Orlando on June 17th 2017 at Gilt! Follow the link for event and ticketing information.

Sound can often conjure color. It’s an acute phenomenon that adds another dimension to music. It’s not just hearing, but also seeing. Montreal electronic music duo Adventure Club—Christian Srigley and Leighton James—architect a similar sensory experience on their 2016 full-length debut, Red // Blue [BMG], rooted in the deft balance at the heart of their signature style.

“There’s always been a pretty strong dichotomy of bangers and more emotional moments during our live shows,” says Christian. “In the studio, we started playing off that back-and-forth between the fiery, energetic material, Red, and the soothing and calming, Blue. Rather than choosing one or the other, you feel that pull in both directions.”

That dichotomy has defined Canada’s Adventure Club since they first emerged in 2010 and embarked on a wild ride to the upper echelon of electronic music. Along the way, their breakout hit “Wonder” [feat. Kite String Tangle] from the 2013 debut EP Calling All Heroes amassed over 10.8 million Spotify streams and earned a Gold certification in Canada. Meanwhile, they notched 10 HypeMachine number ones, syncs on MTV’s Teen Wolf and Eye Candy, and created high-profile remixes for Brand New, Thrice, Alexisonfire, and Metric as well as collaborating with Krewella on the hit “Rise & Fall.” In addition to packing houses on their headline Superheroes Anonymous Tour, they ignited stages at Coachella, Lollapalooza, Bonnaroo, Electric Daisy Carnival, Ultra Music Festival and many more. Expanding the tonal palette, the multi-instrumentalists craft dancefloor-ready music, embracing traditional instruments like guitar, piano, percussion and more.

However, Red // Blue would represent a series of personal and professional evolutions for the pair.

“There were two big changes,” Leighton goes on. “We got sober, and we built our own studio in Montreal. Sobriety jolted our productivity and efficiency. We could muster up ideas way quicker, and the days started earlier. Our attention went into music creation 100 percent.”

“Partying is definitely an aspect of this industry, but it was a matter of prioritizing” admits Christian. “When we were each throwing back a bottle a night, we thought it was giving us energy, but we’d lose a day recovering afterwards. The energy is even higher without it. The inspiration comes in so much stronger when you’re being more ambitious and direct in your intent. As for the studio, we always did the bedroom thing before. We should’ve gotten it done earlier, but we can blame the partying for that too,” he laughs.

Holing up in their new creative headquarters, the boys dove headfirst into crafting the vision for Red // Blue over the course of 2016. They introduced the album during the summer, unveiling the ethereal groove and shuffling synths of “Dreams,” boasting vocals from Norwegian chanteuse ELEA and stoking anticipation for the impending body of work. Now, the first official single “Firestorm” [feat. Sara Diamond] builds from lithe guitar, grooving handclaps, and resounding keys into the heavenly, hypnotic refrain, “I’m a firestorm.”

“The lyrics portray the force of nature a firestorm embodies in form,” explains Christian. “We’ve been touching on this theme of reckless abandon, throwing caution to the wind, and experiencing more viscerally. It’s a dominant theme throughout the record. You’re not stopped by inhibitions or social boundaries. You’re living.”

Ultimately, Red // Blue welcomes full immersion of all the senses and kicks off Adventure Club’s brightest phase yet.

“We’re going for a deep feeling,” Christian leaves off. “I’d love for someone to finish the album and walk away with a slightly altered perspective on a situation they’re in. Their eyes are open. Hopefully, it’s a formal of emotional inspiration that goes a little deeper. We want to put you in a different space where you take something new from it every time you listen.”

“We focus on writing songs first and foremost,” concludes Leighton. “It’s about maintaining that integrity to give the audience more, and the song becomes an experience.”

Adventure Club
Christian Srigley, Leighton James
Montreal, Quebec
weareadventureclub.com
The duo formed while attending high school in Montreal as a hardcore pop-punk band, but later decided to move onto the more electronic sound of electronic dance music (EDM) after simply getting bored with the pop-punk sound. The first song to put the duo on the map was their remix[when?] of the song "Daisy" from the studio album Daisy (2009) by the American alternative-rock band Brand New, which was put on The Hype Machine, an MP3 blog aggregator website. Some of the major influences to their sound include Tiësto, Flux Pavilion, Greeley Estates, Bring Me the Horizon and Skrillex. The duo's signature sound includes high-pitched female vocals with electronic sounds and heavy drops. Through online social network sites, the duo were able to reach new levels of exposure by getting their first music video on the UKF Dubstep's YouTube channel. As of November 2012, the music video to the remix of "Everything to Me" by LIPS has over 2 million views and was produced and directed by Cedric Sequerra of LuckyFish Productions. All of the props, including weapons, helmets & monsters were made by hand by the cast and crew. The duo is signed under the management team of The Standard Group. Some of their signature sound can also be credited to the program that they use to produce their music. Cakewalk SONAR is a less-commonly-used program in electronic dance music where FL Studio and Ableton Live reign supreme, but the duo give credit to the program in separating them from the pack. Some of the other equipment and software that they use include a Fireface console, Traktor Pro, Audio 6 and Kontrol X1. The duo has toured across North America, as well as parts of Europe and Australia and have played at various music festivals including the American Electric Daisy Carnival in Las Vegas, Nevada. They also made their first appearance at the Ultra Music Festival 2013 in Miami and also played at the Ultra Music Festival in Seoul, South Korea in June 2013. The duo's remix of "Crave You" by Flight Facilities and Giselle Rosselli was featured in the episode "Restraint" (2012) of the MTV television series Teen Wolf. In August 2013, Adventure Club partnered with EDM lifestyle brand Electric Family to produce a collaboration bracelet for which 100% of the proceeds are donated to Fuck Cancer. The partnership has raised over $19k as of July 2014. The duo hosted a special volunteering event at the Los Angeles Regional Food Bank in April 2014. They invited fans to come out for a meet-n-greet and to help package food for the less fortunate. The Duo's single "Rise and Fall (featuring Krewella)" was featured on the MTV television series Eye Candy. The Duo's single "Do I See Color" was featured on a 2012 Coca-Cola commercial with dancer Marquese Scott. On December 2nd, 2016, Adventure Club released their debut album, Red // Blue. The duo's remix of "Lullabies" by Yuna was featured in the 2016 video game Steep.