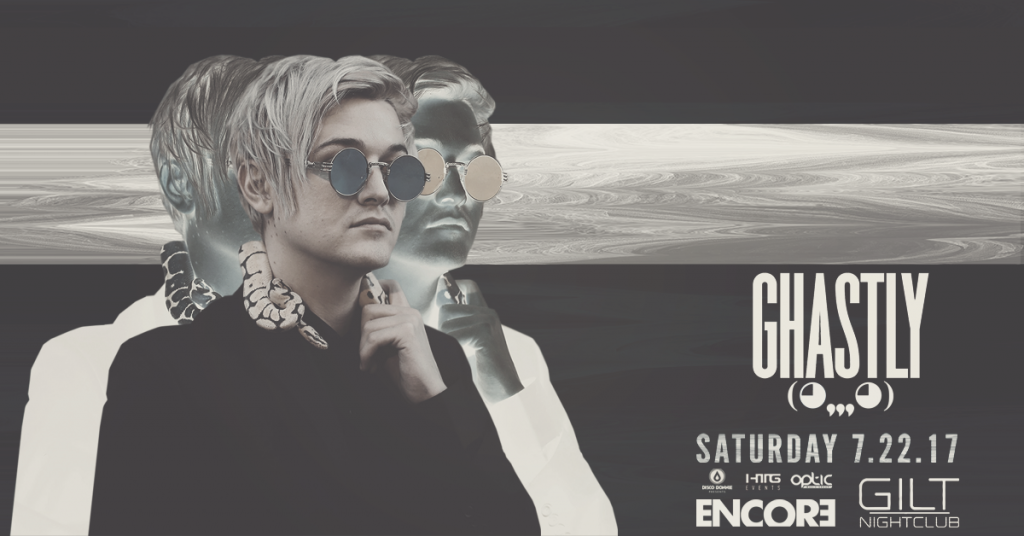 HTG Events, Gilt, & DDP will be hosting Ghastly in Orlando on July 22nd 2017 at Gilt! Follow the link for event and ticketing information.

Entirely self-taught, David Crow’s musical style has progressed from a large variety of genres including Ambient, Death Metal, Experimental, all the way to his current EDM based creations. Music was always important in his life, but electronic production merged with David’s brain at the age of 16 when he was creating music through a beat workstation on a keyboard and re-wiring it into microphone inputs and editing it later through a free recording program called Audacity.

After leaving his family’s goat farm in Buckeye Arizona to live out of his van on Venice Beach California in 2010, he started at the very bottom, and has been quickly been working his way up to the top. From writing music off of a battery converter and a laptop in restaurant parking lots, to currently working as a full-time studio engineer having released under OWSLA and been rated #1 by LA Weekly, David had established a name to be known, and that name is ‘Ghastly!’

Ghastly
Arizona
www.iamghastly.com
Growing up on a goat farm in Arizona might not be considered the typical American upbringing for the next big DJ and producer, but then again Ghastly isn't just your typical American artist. Many have described him as a partially insane young man with a dark sense of humor. Politely abominable and casually destructive, he wields the catch phrase "born to die" as a mantra to his chaotic lifestyle. His sets have been heralded as "Energetic and eclectic live performances which are sometimes followed by odd speeches about the abnormalities of life, regretful sexual encounters, and well cooked food." With such a diverse personality and rapport for his fans, it's clear that Ghastly has one thing on his mind, and that's to change the world.After entering the music scene and practicing his talents with touring metal bands such as The Irish Front, David Lee Crow finally found his calling with dance music and it inspired him to pack up and head to Venice Beach, California to live out of his van with no contacts or connections in a chosen gesture to truly start from the bottom and pursue a new career in electronic production. It didn't take long for him to find his place in the scene, as Ghastly quickly claimed himself a position as Bassrush Resident DJ at Exchange LA, and has also secured a number of releases on chart-topping labels such as OWSLA, Buygore, and Dim Mak to name a few.Ghastly's approachable yet hard-hitting style ushers a forward-thinking dynamic that is not often seen in today's saturated scene, and his solo productions and collaborations present an unequivocal level of determination and finesse. Uniquely blending house, trap, and dubstep into a pot-pourri of bass, the young producer definitively pushes the boundaries of the entire EDM scene today, and a handful of the industry's finest have recognized his potential including Skrillex, Diplo, Dillon Francis, Tchami, DJ Snake, Datsik, Borgore, Zomboy, and Zeds Dead. With slew of mentally-stimulating originals and physically-altering collaborations under his belt, such as his original "Miami Connection" with Jauz and single "Crank It" with Mija & Lil Jon, it's safe to say that Ghastly is on a mission to redefine dance music for all.