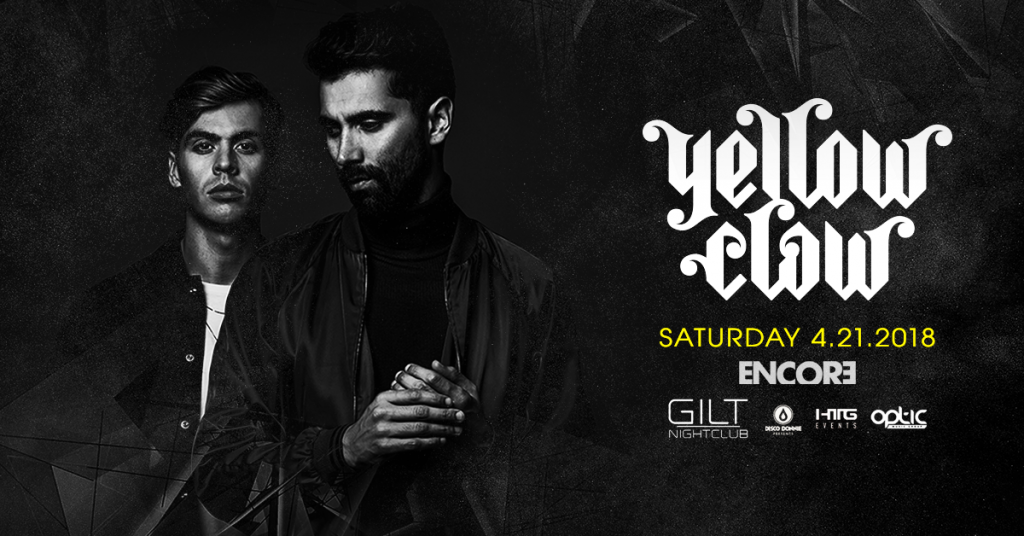 HTG Events, Gilt, & DDP will be hosting Yellow Claw in Orlando on April 21st 2018 at Gilt! Follow the link for event and ticketing information.

At first it was two DJs having more fun playing shows together rather than separately. That turned into an Amsterdam club night, after which Yellow Claw took their show on the road-in the Netherlands and across the world. Their first songs came out in 2012, Blood For Mercy became a mantra and Barong Family was established as a record label. With a huge, loyal fanbase crowding their gigs from Las Vegas to Tokyo and everywhere in between, Yellow motherfucking Claw’s is one of the most electrifying shows you’ll come across.

As much as their music is about energy release by any means necessary, Yellow Claw’s whole approach is highly conceptual and deliberate: from the numbered mixtapes to the branded merchandise (parkas to bathing suits), the slick music videos and collaborations with artists as diverse as Diplo and Ty Dolla $ign, Ti?sto and Pusha T. Launched in 2014, Barong Family has become a home to upcoming, likeminded artists like Cesqeaux, LNY TNZ, Moksi, Mightyfools, Mike Cervello, Chace and more.

Over the years, Yellow Claw has performed at the main stages of EDC Las Vegas, Ultra Music Festival, Jack ?’s New Year’s Eve party, Spring Awakening and Coachella in the United States, Tomorrowland in Belgium, Mysteryland, Kingsday Festival, The Flying Dutch and Sensation in the Netherlands and Future Music Festival in Australia, has held a residency at the Wynn Las Vegas and played numerous headline shows in North and South America, Eastern and Western Europe and all along East Asia.

In November of 2015 Yellow Claw finally delivered its full-length debut album Blood For Mercy on Mad Decent, followed by a massive US tour. Featuring many big name features, it went straight to #1 on Billboard’s Heatseeker Albums as well as Top Dance/Electronic Albums charts and also reached #1 on Beatport.

In 2016, Blood For Mercy won the Edison award (Dutch equivalent of the Grammys) for dance music in the Netherlands. The single “In My Room”, made in partnership with DJ Mustard and featuring Ty Dolla $ign and Tyga, has so far clocked over 10 million views on YouTube and over 96 million streams on Spotify (not counting remixes). Two brand new singles were released both featuring debuting singer Yade Lauren (“Invitation” followed by “Love & War”) with a 16-date Barong Family World Tour scheduled in between for good measure.

As Yellow Claw continue to play shows around the globe almost every weekend, they are pressing on with their second album which is expected to come out before the beginning of spring 2017. In the meantime, Barong Family, keeps up a regular schedule of releasing banger after banger from new as well as more established family members