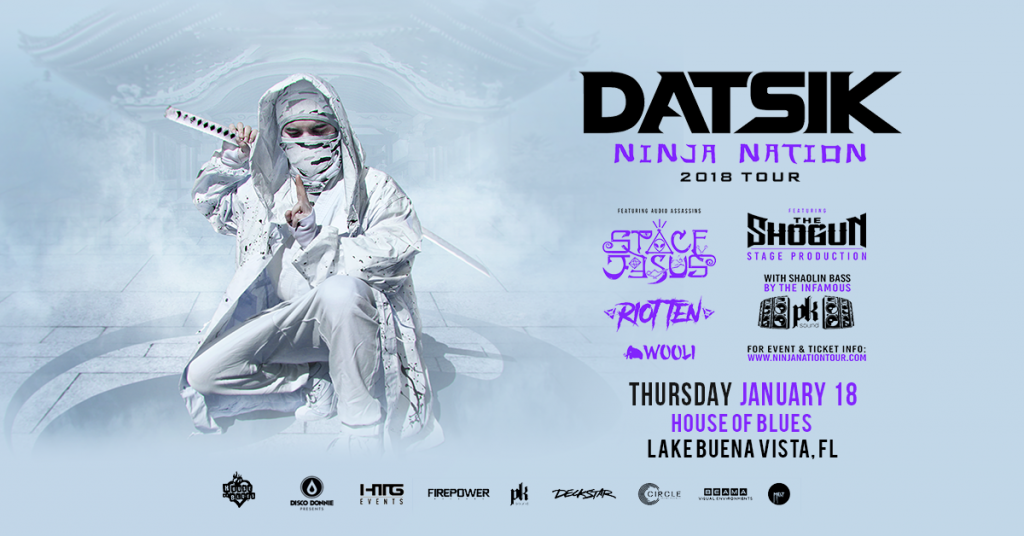 HTG Events, DDP, and Live Nation will be hosting Datsik in Orlando on January 18th, 2018 at House of Blues! Follow the link for event and ticketing information.

With a string of #1 Beatport releases, sell-out tours and a rapidly growing fan base, the Canadian producer/DJ and Firepower label boss has entered this year on an exceptionally high note, and with the release of his most recent LP Let It Burn¸ he’s already making his claim to an even bigger 2014. For DATSIK, his Firepower imprint stands out as an extension of his revered and applauded musical persona. He’s released a series of successful singles and EPs including works for Excision’s Rottun Recordings and collaborated with the legendary Korn on their The Path of Totality album and toured the U.S. with the group. Then, 2012 saw him release his proper full-length debut, Vitamin D, via Dim Mak Records and featuring the epic single “Evilution” [Featuring Jonathan Davis of Korn & Infected Mushroom]. However, founding a label has always been part of his plan.  FIREPOWER, helmed by DATSIK, formally contributes to the music landscape with releases from Barron, Protohype, Rekoil, Terravita, Getter, The Frim, DKS, Sub Antix and more.

Born and raised in Texas, RIOT TEN, at the age of 22, exploded into the world of electronic music with his unique blend of hardtrap, dubstep and electro. With original music out on Dim Mak, Rottun Records, Firepower, and Buygore, Riot Ten’s music can be heard at clubs and festivals around the world from the likes of DJ Snake, Excision, The Chainsmokers, Porter Robinson, Zeds Dead, Datsik, Yellow Claw, Flux Pavilion, Joyryde, Kayzo, and many more. His 2017 single “Fuck It”, a collaboration with fellow producer and heavy metal enthusiast Sullivan King, saw #1 on the Beatport dubstep charts for over 5 weeks in a row with a top 10 position that spanned over 3 months. The single has become a staple on The Chainsmokers “Memories Do Not Open” world tour in 2017, opening each show with explosions and pyro into “Fuck It”. It has also become a staple in the sets of both Zeds Dead and NGHTMRE. Outside of the break out single, Riot Ten’s debut EP released in 2016 on Firepower Records, and he has since been off to the races. With no signs of slowing down, and a trajectory pointing sky high right now, Riot Ten is a sure fire bet to become one of the biggest names in dance music in 2018.

Space Jesus is the feeling you get when you travel through a wormhole in a fresh pair of Jordans. Currently residing in Boulder, CO, Jasha Tull was born in New Jersey and raised on hip hop. With his alarm set to NYC’s Hot 97 throughout elementary school, Jasha started making beats at a young age, and created Space Jesus as a vessel to express his personal experiences through music. With a focus on alien basslines, gangster beats, and future feels, the Spaceman imprints his signature sound onto each genre he graces. After building a reputation for his dynamic live performances, and with appearances at Tomorrowworld, Shambhala, Mysteryland, and beyond under his belt, Space Jesus continues to explore the auditory universe in search of lower frequencies.

Arrive early to avoid the lines and traffic. House of Blues Orlando is located at Disney Springs – formerly known as Downtown Disney.

This is an all ages event