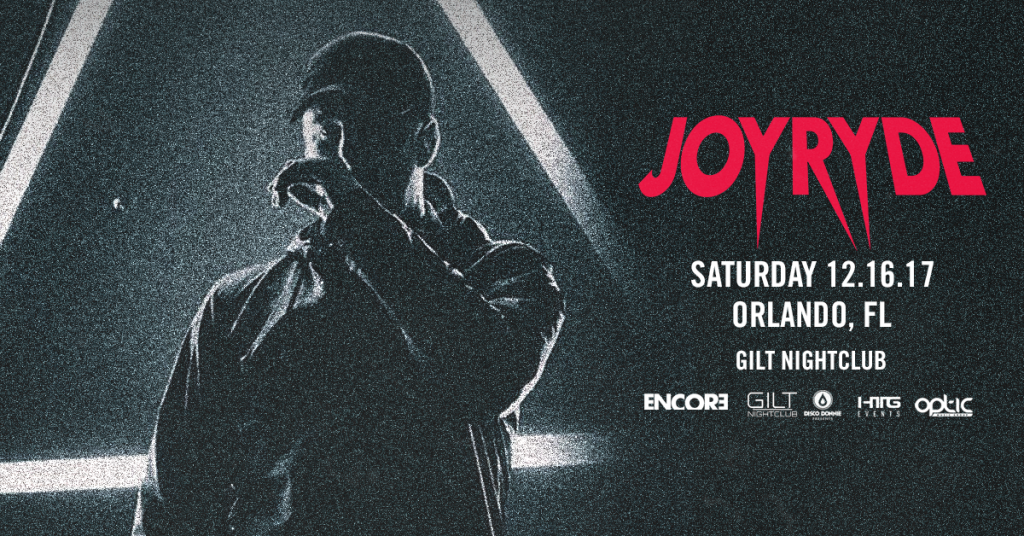 HTG Events, Gilt, & DDP will be hosting the Joyryde in Orlando on Dec 16th 2017 at Gilt! Follow the link for event and ticketing information.

In a little over 6 months, Joyryde has risen from complete unknown to one of the most buzzing acts on the planet. With support from the likes of Axwell^Ingrosso, DJ Snake, Skrillex, Major Lazer, Big Gigantic, Yellow Claw, Tchami, Jauz, Knife Party, NGHTMRE, Martin Garrix, Dillon Francis, GRiZ, Don Diablo, Ephwurd, Ghastly, Dyro and more, the highway to success is paved with bass. Joyryde’s brand of #SwerveHouse is firmly expressed through his massive singles “FLO” and “SPEED TRAP.” Jauz not only champions his “Stick It In Reverse” mix of last summers hit “Feel The Volume,” he has been opening his sets with it for months.

His most recent hit “HARI KARI” made it all the way to BBC Radio 1 via NGHTMRE’s Diplo & Friends mix and was also heard in Yellow Claw’s heralded mixtape series. With every blog raving about the lad, Dancing Astronaut put it best; “At a time of radio-safe club maneuvers, his is a brand out for blood.” He ended 2015 with the launch of his self designed apparel line #RYDRWARE.

He opened 2016 with a Rick Ross feature on the 160 BPM “Windows,” a track who’s genre still cannot be identified. With an arsenal of unreleased tracks, all the big names chatting about him, and some lofty touring goals, Joyryde is sure to hit the ground running in 2016 … and bring all his Rydrz with him.