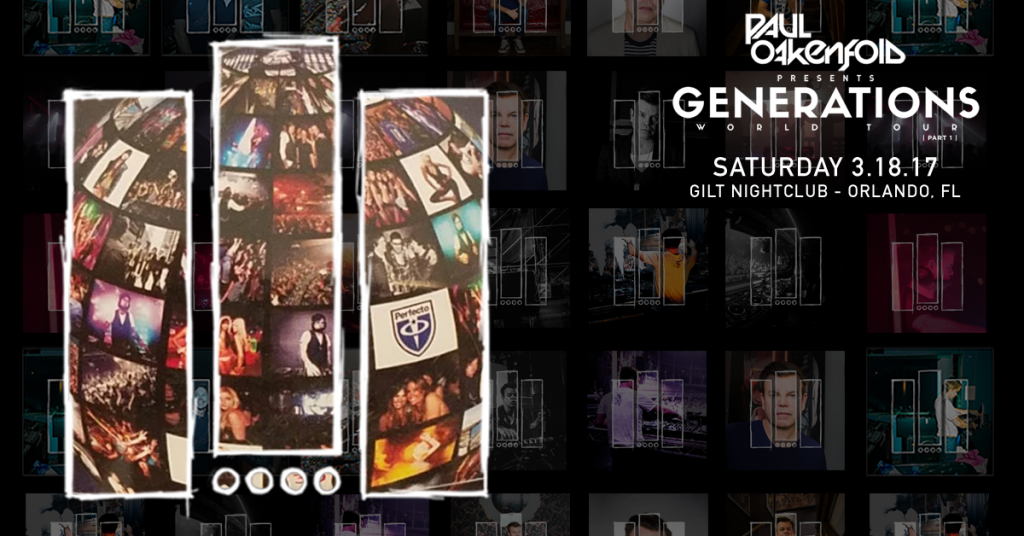 HTG Events, Gilt, & DDP will be hosting Paul Oakenfold in Orlando on March 18th 2017 at Gilt! Follow the link for event and ticketing information.

Paul Oakenfold has been touted as one of the world’s leading DJ/remixers by various outlets including CNN, Rolling Stone, BPM, Remix and more.

• His first album for Maverick Bunkka was released in 2002. It included “Starry Eyed Surprise” featuring Shifty Shellshock of Crazy Town, a Top 10 hit in both America and the U.K. Other guests on the album were Perry Farrell, Nelly Furtado, Ice Cube, Tricky and Hunter S. Thompson (his last recording before he passed away).

• “Starry Eyed Surprise” reappeared in early 2005 as part of Diet Coke’s ad campaign for their re-launch of the beverage using Splenda. Paul’s hit, “Ready, Steady, Go” currently appears in Saab’s US ad campaign, and a new song, “Feed Your Mind” also appears in Toyota’s European ad campaign, for which the major car manufacturer has committed to 42 million Euros (over $51 million dollars) worth of ad buys. Oakenfold also scored the music for a Hummer commercial.

• Paul Oakenfold’s 2004 mix album Another World has reached gold status in sales making it one of the biggest selling dance albums of all time. In total his releases have sold almost 2 million in the U.S. alone.

• Remix credits include, among many others, works for U2, Rolling Stones, Michael Jackson, Justin Timberlake, Madonna, Paris Hilton Jennifer Lopez, Salt N Pepa and The Cure.
• As a touring musician, Oakenfold has DJ’d in hundreds of places around the world. Some unique locations he has appeared at include the Great Wall in China, the Hollywood Bowl in Los Angeles (sold out) and Red Rocks Amphitheatre in Colorado. Other foreign territories he’s appeared include Cypress, Lebanon, Ibiza, Korea and more. He’s also noted as one of the most well traveled electronic touring artists within the United States.

• Paul Oakenfold was the star of Spike TV series The Club and had a cameo appearance in the film The Rules of Attraction.

• Prior to becoming a world famous DJ and producer, Oakenfold served as an A&R consultant for Profile Records and Def Jam, where he signed artists including Salt N’ Pepa, DJ Jazzy Jeff and Will Smith.

• Paul Oakenfold was born in London, England and currently resides in the U.S. Before becoming a major force in the music industry he graduated from the Westminster Technical culinary institute becoming a certified chef. He was also an investor along with rockers Tommy Lee and Dave Navarro in the Hollywood, CA nightlife establishment Rokbar.

Gilt Nightclub Orlando, FL
10:00 pm
END_OF_DOCUMENT_TOKEN_TO_BE_REPLACED
Paul Oakenfold
pauloakenfold.com
Paul Oakenfold is the DJ, remixer, and producer who did more than anyone else to break house music in Britain during the late '80s. During 1987-1988, Oakenfold hosted a series of crucial club nights that introduced thousands of Brits to house music. Just a few years later, he helped push the new dance crossover into the charts by masterminding hit productions by Happy Mondays (among others) and forming one of the most successful dance labels of the 1990s, Perfecto Records. Even well over a decade after his emergence, Oakenfold remained, quite simply, dance music's most popular DJ. Born in London in 1963, Oakenfold began mixing at the age of 16, and hooked up with friend Trevor Fung to play soul and rare groove at a basement bar in Covent Garden. He also spent some time in New York during the late '70s, working for Arista Records and soaking up the disco scene through Larry Levan's genre-spanning sets at the Paradise Garage. Back in England by the early '80s, Oakenfold worked as a club promoter and British agent for the Beastie Boys and Run-D.M.C. He continued DJing as well, and eventually ended up at the Project, one of the first venues for house music in England, in 1985-1986. With Fung and another friend named Ian St. Paul, Oakenfold was introduced to the exploding club scene on the vacation island of Ibiza (near the coast of Spain) during 1987 and imported the crucial mix of house, soul, Italian disco, and alternative music later dubbed the Balearic style. During 1988-1989, house music and the Balearic style gestated at several Oakenfold-run club nights (Future at the Sound Shaft, then Spectrum and Land of Oz at Heaven) before emerging above terra firma as a distinctly British entity. Oakenfold and Steve Osborne had been working with new dance converts Happy Mondays, and their production for the 1989 Happy Mondays single "(W.F.L.) Wrote for Luck" was voted Dance Record of the Year by NME. The duo's production for the Happy Mondays' breakout full-length, Pills 'n' Thrills and Bellyaches, placed them squarely in the vaunted territory of other new dance producers like Andrew Weatherall (who achieved similar success with Primal Scream's Screamadelica from the same year). Soon, major labels were lining up to have Oakenfold and Osborne remix their biggest pop stars, including U2, Simply Red, New Order, the Cure, Massive Attack, M People, Arrested Development, the Shamen, the Stone Roses, and even Snoop Doggy Dogg (some as Perfecto, the combination remix service and RCA-connected record label founded by the pair in 1990). The Oakenfold/Osborne team were nominated by BPI as Best Producers from 1990 to 1993. By the mid-'90s, dance music had reached the mainstream of British radio and culture, with Oakenfold at the front of a new wave of globetrotting DJs; he toured with U2 and supported live gigs by INXS, the Orb, Simply Red, Boy George, and Primal Scream. On Britain's ever-growing club circuit, he inaugurated the London superclub Ministry of Sound early in the 1990s and became a resident at Britain's other superclub, Liverpool's Cream, instead of taking big money for independent gigs. He also cut down his remix schedule to less than five per year, concentrating instead on the release of a half-dozen mix albums, including several volumes in the Journeys by DJ series. Oakenfold left Cream in 1999, after which Virgin commemorated the occasion with the release of Resident: Two Years of Oakenfold at Cream. Perfecto Presents Another World arrived the following year. A monumental U.S. tour and the fresh Voyage into Trance appeared in early 2000, as did Swordfish: The Album, a soundtrack Oakenfold constructed for the sci-fi film of the same name. In 2002, Bunkka became his first album of new productions. Mix albums like Creamfields (2004) and Perfecto Presents...The Club (2005) appeared before his second production effort, A Lively Mind, landed in 2006. Perfecto: Vegas would arrive in 2009, the same year Oakenfold produced the new title cut to Madonnas hit collection Celebration. In 2011, it was announced he was working on a new album, Pop Killer, with guest artists Cee Lo Green and the Red Hot Chili Peppers.