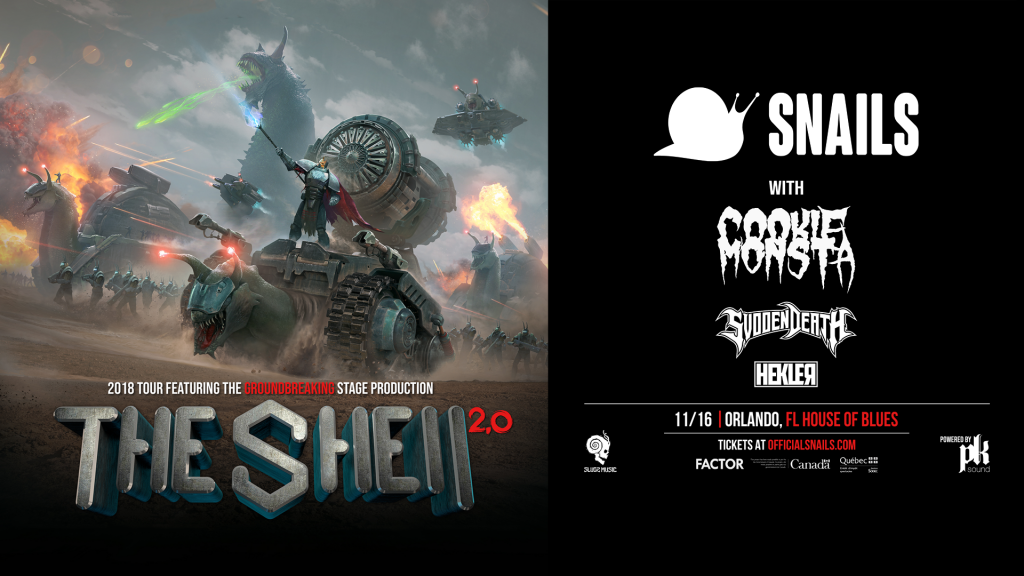 HTG Events, Live Nation & DDP will be hosting the Snails in Orlando on Nov 16th 2018 at the House of Blues Orlando! Follow the link for event and ticketing information.

In today’s saturated EDM market, originality is hard to come by, but Montreal producer Snails has managed to rise above the pack with a an unmistakable sound called “Vomitstep”. Having cut his teeth DJing in the local bass scene, Snails worked tirelessly in his small apartment to craft his own vision of dance music, combining trap rhythms, dirty bass lines and off-kilter sound design. His first tracks appeared online in 2012 on fledgling imprint Kannibalen Records. Success was not immediate, as the forward-thinking French Canadian’s sound was so different and weird. But slowly, audiences started listening, and DJs started noticing the awesome power behind “Vomitstep”.

In 2014, Snails started gaining serious traction in the industry, releasing “Wild” and “Pump This” on Skrillex’s OWSLA imprint and making his first US concert appearances. Fans and promoters quickly noticed that not only could Snails churn out massive tracks in the studio, he could also rock a party like no one else. It was only natural that in 2015, the stages grew bigger as Snails threw down acclaimed sets at festivals like EDC Las Vegas, Ultra and Electric Forest. He was also the only guest producer tapped by Skrillex and Diplo to appear on Jack U’s multi Grammy-winning album. In early 2016, Snails truly conquered North America on the massive “Enter Slugz City” Tour which saw the bass prodigy sell out major concert halls across the continent. He also solidified his presence as an unmissable festival act with widely acclaimed sets at Coachella and Lollapalooza.

Determined to cement his stature as one of the leading figures in bass music, Snails worked tirelessly throughout 2017 on one of his biggest projects ever, his debut album and first full-production tour, both called “The Shell”. He debuted both at his sold-out Red Rocks concert “Sluggtopia” in September, where attendees were astonished by the innovative stage design and new music. Released in October, the eagerly-anticipated album features collaborations with noted producers like NGHTMRE, Big Gigantic and Dion Timmer and appearances by all-star vocalists like Waka Flocka and Collie Buddz. Hailed by Billboard as “a totally outrageous collection of grimy sounds and mosh pit motivation”, it was met with unanimous acclaim by dance music fans and critics alike. The tour was equally successful, packing out rooms across North America during the non-stop 48 show run. Having capped the year on such a high, Snails looks poised to enter 2018 as an indisputable king of the electronic music scene.

Cookie Monsta aka Tony Cook is a producer and DJ from Nottingham, UK who represents the loud and grimy side of dubstep. “If you crave the downright nasty dubstep then Cookie Monsta’s your guy. Packing a recipe of face-slapping snares, ground shaking bass and eye gougingly dirty synths … his sound resembles that of a demonic bass-saw that easily lacerates the ear drums of all it encounters.”

As a child Tony spent hours on his brother’s Playstation creating sounds on Music 2000. This inspired him to study music technology at college and it was here that he was introduced to Reason software, which he was, before long, to use to such devastating effect.

Always attracted to the dirtier sides of music, whatever the genre, he was caught off guard by Rusko’s upbeat style on hearing ‘FabricLive 37’ and became instantly hooked. He began to make dubstep-style tunes, random beats with a grime sound.

After rocking the place out with his first ever performance at a college end of year gig, the buzz he got was so amazing that he began to concentrate seriously on his music – and Cookie Monsta was born.

His barbaric basslines and grimy style quickly started to generate interest, and soon he had hooked up with Flux Pavilion. Intrigued by Tony’s ability to create unique and mystifying noises, Flux invited him to join Circus Records, and Cookie Monsta officially entered the world of dubstep with his first release, ‘Ginger Pubes / Blurgh!’.

Next invited to remix Taio Cruz’s pop tune ‘Dirty Picture’ ft Ke$ha, Cookie successfully switched the tune from pop to gritty by adding his trademark bassline. Further releases followed including ‘Fat Girl Rodeo’ on the Circus Records ‘Beats and Pieces’ EP, and a number of remixes such as ‘Supafly’ on Hard2Beat Records.

Cookie got the opportunity to showcase his talents on the decks for the first time ever in public on the Circus Records Takeover on GetDarker TV. And with ‘Ginger Pubes’ becoming an anthem for dance floors all over the world it wasn’t long before Cookie was DJing around the world.

All Cookie Monsta wants is to have a good time, and he wants you to enjoy yourself too, so with world domination on his to-do list, watch for a visit to a town near you soon, join in, have a laugh and brock out.

Howland is originally from The Bay Area. His father is a software engineer and his mother is a schoolteacher. He has been interested in music since a young age and has experimented with all kinds of genres, ranging from jazz to metal.

When Howland was in high school, he started to use Ableton and became obsessed with it. After a short stint making big room house, Howland started creating dubstep sounds under the name SVDDEN DEATH in 2015. Some of his most popular songs include “Last Life”, “Take Ya Head Off”, and “Junkworld.”Some of his collaborators include Borgore , Subtronics , Yakz , and more. Howland has released music under the label Never Say Die. As of July 2018, he had around 38K followers on Soundcloud, 30K likes on Facebook , 30K followers on Instagram , and 21K followers on Twitter

Las Vegas born and raised producer Shaun Bacus better know as HEKLER, came out of nowhere with his intense eerie take on bass music in early 017. Gaining support from some of the biggest names in the industry including: The Chainsmokers, What So Not, EKALI, NGHTMRE, Whipped Cream, Josh Pan, Adventure Club, and many more. Shaun has been able to progress at an alarming rate taking the industry by surprise. When listening to his tunes, you are left with a puzzled look on your face, wonder…HOW? HEKLER is no stranger to being unique and creating something that you’ve definitely never heard before.

Shaun had started his musical journey at the early age of 13 years old. He was no stranger to music. He grew up listening to a diverse selection of music, playing the trombone, drums and piano. Early 2010 is when he was first introduced to electronic music via UKF. Listening to legends including Noisia, Flux Pavilion, Nero, Skrillex, DJ Fresh and many more, he grew a love for something that wasn’t necessarily considered “cool” to listen to at the time. From that point on, he started messing around in FL Studio trying to replicate the tunes he loved so much. Unfortunately, they were a tad bit too complex so Shaun took the hip hop route and began producing beats, learning the ropes of music production. Early 2015, he finally took the leap of faith into the “electronic” elements of producing, learning sound design which crafted his style into what you now hear in his tunes.

Finally releasing music in early 2017, HEKLER has created a sound that is truly his. He has shown no signs of stopping and only continues to keep things fresh and unique with every single release.