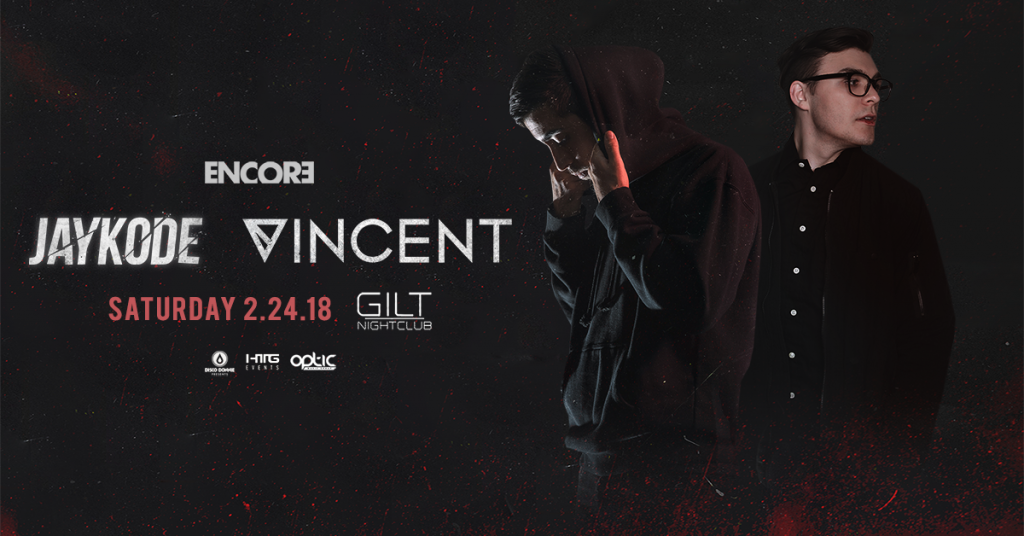 HTG Events, Gilt, & DDP will be hosting Jaykode & Vincent in Orlando on Feb 24th 2018 at Gilt! Follow the link for event and ticketing information.

Los Angeles-based producer Joey Khodanian, better known as JayKode, started his musical journey at age 7, when he began playing classical piano. By age 15, he had immersed himself with the guitar while experimenting heavily with metal and hardcore, demonstrating his commitment to developing a well-rounded knowledge of music composition. Building on this foundation, he started to explore both hip-hop and electronic productions soon after, and fused his knowledge of both traditional and experimental music genres. JayKode’s passion for strong compositions and melodies stems from his classical training, a rarity among today’s electronic music producers.

Armed with an eclectic repertoire of originals, remixes, and bootlegs, JayKode has cultivated a rapidly growing fan base in dance music. Pioneering the genre he calls “Classical Bass,” a tribute to his musical roots, he effortlessly blends melody-driven compositions with aggressive basslines and production techniques to push the tonal boundaries of electronic music. Now with characteristic sounds rooted in future bass, trap, and hip-hop, JayKode readily brings a unique set to every stage, spinning a wide variety of genres, from bass music to electro-house, twerk, moombahton, and even oldies, ensuring no two JayKode sets tell the same story.

JayKode’s originals and remixes are consistently supported by A-Trak, Borgore, Diplo, DJ Snake, Jack U, RL Grime, The Chainsmokers, and many more – but his most significant exposure came from Skrillex, who featured his remix of Beyonce’s “Drunk In Love” during his iconic set at
Coachella 2014. Since then, he has released tracks on Ultra Records, Big Beat Records, Atlantic Records, Fool’s Gold Records, Buygore Records, Elysian Records, Main Course Records, Arkade Records, and Unborn Records. He’s also seen his remix of Galantis’ “Runaway (U&I)” soar up Hype Machine, claiming the #1 spot on the overall charts. Some of his most recent successes comes from his collaboration with Party Thieves on “Origin,” which debuted at the top of the Beatport charts, and his remix of “Closer” by the Chainsmokers and Halsey

Robert Hughes, best known as Vincent and formerly known as XVII, is a Canadian music producer of trap, electronic, bass music and hip-hop. He debuted in 2015 with remixes of Meek Mill & Drake’s “R.I.C.O.” and Alison Wonderland’s “U Don’t Know.”

Jaykode
JayKode is the moniker of Joey Khodanian, a Los Angeles-based EDM producer who fuses classical-inspired melodies with bombastic trap, dubstep, and electro-house beats, dubbing his sound "classical bass." He began studying piano at age seven before taking up guitar as a teenager, then interested in metal and hardcore. After getting into hip-hop and electronic music, he started developing his style of aggressive yet dreamy bass music. His track "The Gregorian Life" was released by Dirt, Lies & Audio Black in 2012. Since then, he began appearing on dubstep and trap compilations, and he remixed songs by Beyoncé, A-Trak, Galantis, and others. His tracks were played by well-known DJs such as Diplo, Skrillex, DJ Snake, and others. Throughout 2015 and 2016, numerous JayKode singles were released by labels like Elysian Records, Unborn Records, and Borgore's Buygore. He also collaborated with Party Thieves on a track called "Origin" and remixed the Chainsmokers' "Closer."