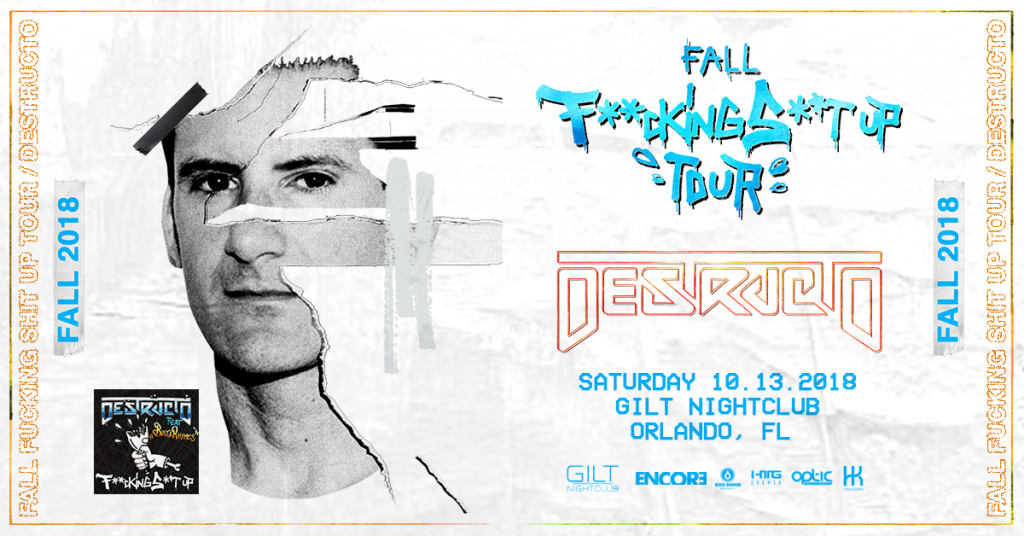 HTG Events, Gilt, & DDP will be hosting Destructo in Orlando on October 13th 2018 at Gilt! Follow the link for event and ticketing information.

Destructo (Gary Richards) began DJing and producing undergrounds in the early 90s in Los Angeles, most notably creating RaveAmerica at Knotts Berry Farm. Rick Rubin subsequently handpicked Gary for A&R in electronic music at Def American Recordings, launching a noteworthy career with such acts as Lords of Acid, Messiah, David Holmes, Basement Jaxx, Dub Pistols, God Lives Underwater and founding 1500 Records and Nitrus Records. After carrying his success to the metal world with No Name Mgmt, Destructo returned to his roots in 2007 by creating HARD. HARD events such as the HARD Haunted Mansion have become synonymous with cutting edge electronic music and unforgettable experiences, where the talent rosters reflect Destructo’s own impeccable DJ sets.

Central Florida Fairgrounds & Exposition Park Orlando, FL
7:00 pm - 1:00 am
END_OF_DOCUMENT_TOKEN_TO_BE_REPLACED
Destructo
Gary Richards
Washington, DC
www.djdestructo.com
They say real recognizes real… As a producer, artist, DJ, and founder of HARD Events, Gary Richards always keeps it real. His uncompromising approach to music spurned the creation of a new hip-hop and house hybrid in the form of 2014’sWEST COAST EP featuring rap heavyweights such as YG, Ty Dolla $ign, Problem, Too $hort, Warren G, and Kurupt. Following the release, he’d deliver explosive sets around the world from Tokyo to Ibiza and at his own sold out HARD Summer 2015 as well as two installments of his wildly popular electronic music cruise HOLY SHIP! and the Ship2Ship Tour. However, he knew that his next musical evolution had to be bigger, bolder and better. “When I did the WEST COAST EP, I didn’t necessarily have a plan,” he admits. “I knew what I wanted to do, but it was still so fresh to me. I felt like I was chasing something different. All of a sudden, I’m in the studio with guys, and I became comfortable. So, I thought, ‘How do I make this better and truly fucking dope? How do I make music for the club and a festival, define my sound, and what I want to do going forward?’” He answered that question with the appropriately titled 2016 single “4Real” featuring Ty Dolla $ign and ILoveMakonnen. Beginning with a strikingly smooth vocal from Ty Dolla $ign punctuated by fingersnaps and nocturnal synths, the track slips into DESTRUCTO’s signature style, dripping with West Coast resin and House boom. ILoveMakonnen blesses the track with a flavorful and fiery verse, and everybody rocks together for the psychedelically sexy video. “The second night of HARD Summer, Ty told me he wanted to go back in the studio. However, he could only do it the next day,” recalls DESTRUCTO. “So, I went down to his house with Wax Motif, and he just started singing, ‘I’m for real.’ I had already spoken to Makonnen about the track, so Ty shouted him out. Makonnen then returned the favor. They’re bringing some of their world to me, and I’m bringing some of my world to them. That’s what’s happening. I spent about six months perfecting the song with Wax Motif and Styalz Fuego. It had to be fucking insane before we dropped it.” The crowd went “fucking insane” the first time they heard it. He debuted “4Real” live with Ty Dolla $ign and ILoveMakonnen as special surprise guests on January’s HOLY SHIP! sailing, immediately fueling anticipation for the track. It also marks a new dawn for DESTRUCTO as the first release on his label Hits HARD. “I’ve been doing this for so long I know how to get everything together,” he says. “I’ve reached a place where I want to put music out on my own, and I’m free to do whatever the fuck I want.” It’s that kind of attitude which cemented his status as a trailblazer in electronic music. Since 2011, he’s released a string of dance floor anthems across his Technology EP [2012] and Higher EP [2013]. His influence permeated other genres as he contributed official remixes for the likes of Depeche Mode, Giorgio Moroder, Major Lazer, Rob Zombie, Digitalism and more. Moreover, he’s performed at the likes Coachella, Lollapalooza, Voodoo Music + Experience and countless other festivals. Now, “4Real” lays the groundwork for his next body of work. Throughout everything, he’s “4Real” as it gets. “I hope everyone feels it the way I feel it,” DESTRUCTO leaves off. “It’s been an ongoing process to bring these worlds together. I’m fortunate to have these dudes believe in me. I’m trying to make music you can drive to, dance to and live to.” Look for a new EP from DESTRUCTO this spring.